It used to be that when Xavier played a BCS school, any BCS school, they were a major underdog. Tonight, the opposite was true. Georgia came in at 4-1, but they had just gotten throttled by Cal and seem to be on track for a down year. Xavier came in undefeated at 3-0, with Georgia looking to be the first moderate test in what had been a less than challenging non-conference schedule so far. 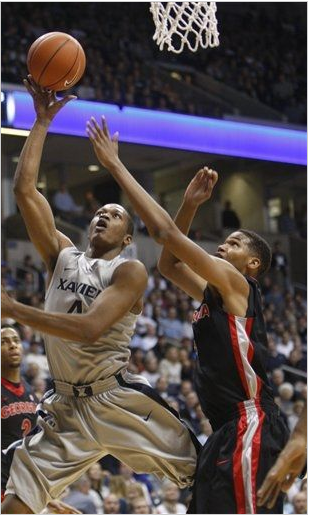 The first seven minutes bore that out. Xavier led 10-0 early and Georgia was turning the ball over as if that were the purpose of the game. That's not to say XU was playing well either, because they weren't. Missed free throws, turnovers, and poorly executed offense were keep the Bulldogs in a game that the Musketeers should have been running away with.

The offensive miasma continued as the clock wound down through the eight minute mark. The Bulldogs were contesting shots, trying to play tough defense, and generally making a nuisance of themselves. For their part, Xavier was missing easy shots (three missed layups) and still turning the ball over at an absurd rate (five in 12 minutes).

After the under eight timeout, Xavier finally woke up. The lead didn't stretch past nine, but the Musketeers showed signs, an assist from Andre Walker, six converted free throws from Mark Lyons and Tu Holloway, and tenacious defense from Justin Martin, of being a team about to explode.

Xavier was just that. A 35-8 run to open the second half buried UGA before they had a chance to make it a contest. As with most Xavier runs this year, Andre Walker was all over the place, accounting for the first four points of the half and feeding Holloway for another bucket. The often maligned Kenny Frease was a defensive monster, blocking three shots and changing many others. With Walker and Frease controlling the glass and Travis Taylor showing off the athleticism that got him out of Monmouth, the lead blew up to 36.

Most notable in the monster run was the relative lack of shots from the guards. For the game, Lyons, Holloway, and Dez Wells combined for only 15 attempts from the floor. With the three main scorers accounting for a very efficient 28 points off those shots, it was the big men that ran this game. Travis Taylor recorded his first double-double with a 10/12/0 line, Andre Walker stuffed another stat sheet with 6/3/3, and Big Kenny accounted for 12/8/3 with three blocks.

Georgia made a run late as Coach Mack tinkered with lineups and the starters continued their mildly disturbing trend of losing focus late in a win. That said, the 70-56 final score still flattered the efforts of the Builldogs. This was as game that Xavier controlled from start to finish and it was as comprehensive a victory as you are ever likely to see. Beating a BCS team is no longer the challenge it used to be.

Can Xavier be effective in the half court against a tight man? Yes. Improving the free throw shooting helped turn previously wasted possessions into fruitful ones. X didn't exactly tear up and down the court but they managed 49% from the floor and 70 points against a team that would have loved to slow the tempo.

Will anyone step up as an interior scorer? Frease and Taylor equaled Holloway and Lyons in scoring tonight and were both extremely efficient down low. Georgia doesn't have a big on the level of Festus Ezeli, but seeing the bigs put up some points has to make Coach Mack happy with the schedule taking a swing for the difficult.

How deep does Coach Mack want the rotation? This wasn't the game to answer this question. A 35-8 run turned this into a game where everyone was getting run. Expect Vanderbilt to force the coaching staff to only play the guys they see as legitimate contributors.

- I hate to keep hammering on the kid, but Jeff Robinson isn't getting anything done. 2/2/0 isn't the line of someone who is going to make an impact on the season.

- Justin Martin had a game that was hard to read. A 0-4 from the field and 0-6 from the line looks awful, but he played fantastic defense and raked down six boards. Make of that what you will.

- Watching a game with my dad is still an experience. A family room full of six brothers, a compliment of wives, and a handful of kids makes for quite the watching atmosphere.

Next Game: Monday @ Vanderbilt at 7pm. This will be the first real test on the schedule.