Full marks to "Takeoff" Travis Taylor tonight, who was a monster on the glass and around the paint from the word go. In a game that Xavier dominated for half an hour before rolling fresh legs in, Trav set the tone by posting 10 and 12 on 4-8/0-0/2-2 shooting. The Muskies seemed committed to forcing the ball into the painted area of the key 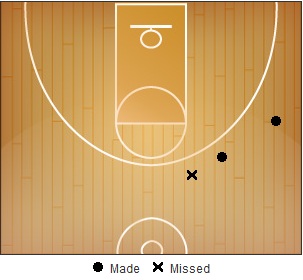 tonight, and Travis Taylor's ability to get buckets on the post and insatiable rebounding effort - including four on the offensive end - went a long way towards making that strategy successful.

Brad Redford looked like himself for the first time this season, posting 7/0/0 on 2-3/2-3/1-2 shooting. Six of Redford's points came on about 48 feet worth of three balls, both of which had him walking it off down the court as soon as they left his hand. He's a fairly limited player in terms of what roles he can fill, but - like Charles Emerson Winchester III before him - he does one thing and does it very well.

Big Kenny did the things we all hope Big Kenny will do tonight, 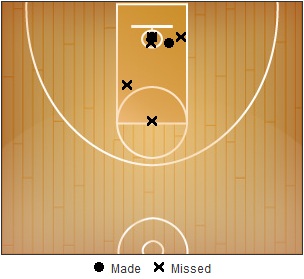 throwing up 12/8/3 with 3 blocks generally asserting himself in the middle. Even more impressively, the big man continued to show great hustle, getting on the floor for a couple of loose balls and sticking around on the offensive end to support Justin Martin before getting rewarded with an easy dunk. He also managed to beat the entire Georgia squad down the court on one occasion, again being rewarded - this time by Tu - with a monster dunk. His six turnovers were more than you'd like to see and accounted for almost half of the team's total, but he's making the effort and generally hurting teams that push to the perimeter.

The Muskies put four scorers into double-digits tonight; two were guards and two were interior players. Obviously, you have to love that balance from Xavier. Even better (kind of), none of those players was Dezmine Wells. Wells didn't look like an explosive threat tonight, but he only shot three times. Tu Holloway got his 10 on 2-4/0-0/8-8 shooting; when X can post 70 points while having those two players combine for seven shots from the floor, you know the Musketeers have a ton of scoring threats in the side.

Odds and ends:
-Justin Martin went 0-6 from the line and ran his season FT number to 2-14. When a player with his shooting ability posts that kind of performance from the line, you know it's between his ears.

-Other than Martin's problems, Xavier went 19-24 from the line. Just shy of 80% from the line is a pretty acceptable number for the team.

-Dee Davis and Justin Martin were all over the passing lanes tonight, and Davis was especially active with his hands while defending the ball. The two combined for five steals and tipped several other passes.

-Georgia had 7 assists and 14 turnovers tonight. Part of that is credit to the Xavier defense, but the Bulldogs don't have anyone on the team who makes good decisions.

-Xavier was even with Georgia on offensive boards at 10 all, but took home a 38-28 advantage on the glass overall.

-X had 13 turnovers, but only 4 in the second half. I suspect Coach Mack may have touched on that at the interval.

Dad's take:
(I was at Dad's house for the holiday tonight, so I was able to hear his stream of consciousness without the iPhone keyboard confounding his communication skills. What follows is a sampling of his observations from tonight's game. As always, it's important to remember that he's an old school basketball guy and a die-hard Muskies fan.)
-"I love Walker; he looks so much better now. I may have rushed to judgment on him after that first game."
-"Lyons can really hang in the air and finish."
-"I think Wells might be the real deal. I hope he stays all four years and develops into a leader like Dante."
-Early, during a shot of the bench: "I wish they'd pan left; we might get a look at Redford."
-Every time Redford was on the floor and X was on offense: "Pass it to him! He's open!"
-After Redford's first three:"OHHHH! That was from like 28!"
-"I don't know why Kennifer doesn't do this every game."
-"McKenzie has his warm-ups off? This one must be over."
-"We get sloppy when we have the game in hand. Coach Mack can't be happy."
-"I wonder what Walker will do against his old teammates. Probably dominate."

As always, come back for Brad's full recap at nine tomorrow morning. Xavier's next game is Monday 11/28 @ Vanderbilt.