What an ugly, ugly game. I usually kick this feature off with the line of the best or most interesting line from the Xavier box score, but there was something more influential in play tonight. Xavier's intermittent success during this game was directly correlated to its defensive intensity. Xavier forced Miami into 18 turnovers, including 11 steals. In the possessions off of those 11 steals, Xavier went layup, missed 3, missed 3, 2-2 FT, layup, layup, 1-2 FT, dunk, turnover, layup, layup - and often within 6-10 seconds of the steal. That's 15 points on 6-8/0-2/3-4 shooting with only one turnover. When X cranked up the defensive intensity, success by way of easy buckets followed on the offensive end. 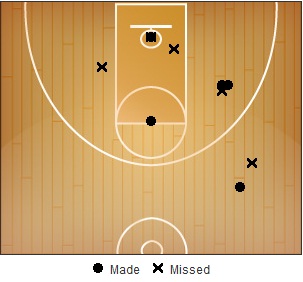 Mark Lyons was again an extremely efficient offensive force for Xavier, posting 18/4/1 on 7-13/1-2/3-5 shooting. Cheek was part of the problem more than part of the solution from the free throw line, but it's hard to be mad at a guy who put up 18 points on only 13 shots. Mark also excelled from mid-range, which has not been a strength of his in the past. With his continually improving three-point shot and notable athleticism, Lyons is already a tough guard. If he continues to knock down mid-range shot like you see on the shot chart to the right, he's going to be borderline impossible to stop.

Xavier's 12-21 mark from the line really mars the fact that the Muskies did an excellent job at the little things tonight. Eleven assists on twenty six buckets is a respectably solid rate. We've already covered Xavier's defensive intensity and ability to force Miami into turnovers, but X did a good job in keeping care of the ball by only turning it over nine times. Outrebounding the RedHawks 34-25 and 12-3 on the offensive boards is definitely a big time step forward for the Musketeers. The six charges X drew also really helped swing things in the Muskies' favor. 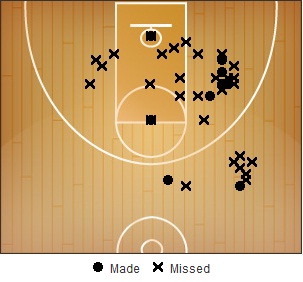 Here's something I'm not sure what to make of. Check out the shot chart to the left: what jumps out at you? If you said anything other than the absurd distribution of shot attempts, perhaps you should stop drinking and go to bed. Xavier put up 60 shots as a team; four of them can from the left side of the floor. The shot charts from the previous two games are pretty well-balanced, so I doubt there's anything instructive to be taken from this. Still, it's at least a little bit weird.

Big Kenny posted 13/7/1 on 6-14/0-0/1-5 shooting. He was a big influence on the game for stretches, especially on the boards and in challenging shots on the defensive end. He was 1-7 from mid-range though; if Frease is going to be a dominant force, he needs to be working closer to the basket. Tu Holloway was also somewhat underwhelming, putting up 9/4/5 on 3-12/0-3/3-4 with 3 steals. Only turning the ball over once reflects well on him, but 3-12 from the floor adds up to a lot of empty possessions from Xavier's point guard.

Odds and ends:
-Travis Taylor post 9 points and 6 boards on 3-7/0-0/3-5 shooting. He also had two steals and only one turnover. Not great shooting, but a step in the right direction for the big man.

-Brad Redford has 2 points on 2 free throws. He got inside the arc after a pump fake and then drew the foul. Red's game has really developed since he was just a dude who stood outside and chucked.

-Andre Walker didn't post a huge offensive game, but he got four offensive boards, an assist, a steal, and only one turnover while helping out on Mavunga at the other end.

-Bill Edwards - who I noted as a poor outside shooter in the preview - knocked down his first four attempts from behind the arc. Thanks, Bill.

-Xavier's 2-9 from behind the arc was somewhat uninspiring.

Dad's take:
(My dad is an old-school basketball guy and a die-hard X fan, and he and I text throughout the games from time to time. His opinions can be both insightful and entertaining, especially pulled from their context. Below is a sampling of his offerings tonight.)
-After Frease's early buckets: "Kenny must have read my comments." "Kenny: monster!"
-"Wells may be the real deal."
-"We look uninterested."
-"Miami playing tight D; Red may never see the court." "Red draws a foul and will shoot TWO!"
(He loves Redford. He keeps me posted on how the game is setting up for Redford's skill set.)
-"Down two at the half. Just going through the motions."
-"D has picked up. Two steals and Tu just picked up a second charge."
-"Some white dude just schooled Big Kenny."
-"One minute intense, next minute slow."
-"BK misses two FT. Team at 50%!"
-"Wells is fired up! 11 steals, 16 TO [forced]. Looking better now."
-"We shoot [FT] like Memphis. No excuse."
-"Sad and boring game. Mack is not happy. Wells and Walker carried the day."
-In re: Walker: "Intangibles. Not a stat guy. I've always loved him."