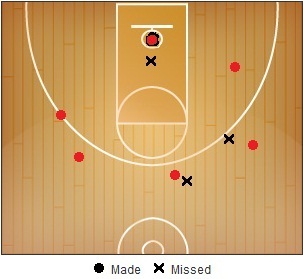 again not only posted a monster line - 21/4/5 on 8-14/4-6/1-2 shooting - but took his time warming into it. Cheek was 1-7 from the floor at the half before something or someone inspired him to go bananas in the second half. He put down all seven of his field goal attempts after the intermission and generally looked like one of the most dangerous guards in the A-10. Those red circles on his shot chart are attempts taken in the second half; the one under the bucket represents the two layups he made during that period.

A couple of other statistical nuances of the game were considerably less encouraging for the Xavier faithful. After getting off to a 11-3 advantage on the glass, Xavier let the Mastadons out-rebound them 34-23 to end the game with the 'Dons up 37-34 in the battle of the boards. Against a team that doesn't boast a lot of height, that's not a good result for Xavier. The Muskies' second straight 50% showing from the line (11-22 tonight) will also no doubt feature in Coach Mack's talk when he reviews this game with the team. In a game where a lot went right, those are a couple of alarming trends to keep an eye on as Xavier's level of competition increases. 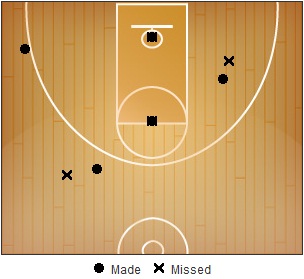 Tu Holloway - perhaps you've heard of him - had about the best game one could have hoped in his return to competitive basketball. Not only did the senior post 24/5/4 with a steal and a lone turnover, but he did it on an insanely efficient 7-10/2-3/8-11 shooting line. He'll no doubt look back with chagrin on those three missed free throws, but he started by not forcing himself into the game early, let the flow come to him in the course of time, and ended up with a vintage Holloway performance. His baiting of Joe Edwards into a three-shot foul was mid-season form for him. His shot chart is pretty sparse for a guy who posted 24 points; for him to get that much out of the game without ever having to try to force anything is great news for Xavier fans.

Dezmine Wells showed up again tonight. His 16/5/0 came with 2 steals and a block on a 6-9/2-4/2-2 shooting line. He came out of the gates hot for X, posting 12 of his points in the first fourteen minutes and change of the game. His explosive athleticism is a huge asset to his game -  he picked up four of his points from offensive boards and added two more on a steal and bucket - but he was also serviceable with the jump shot tonight. If he can continue to shoot well enough to make defenders respect him on the perimeter, his first step is going make him an absolute nightmare matchup for opposing teams.

Odds and ends:
-X turned the ball over 16 times tonight. Coach Mack usually wants to limit that number to about 12, so the Muskies have a little work to do in that department.

-Mark Lyons did a great job on Frank Gaines; it took the IPFW guard 22 shots to get his 22 points. Only Gaines 11-11 showing from the line even mildly redeems his night.

-Jonny Marlin went for 2/3/5 with only one turnover. Good on the young man for taking care of the ball against some pretty good defensive guards.

-Travis Taylor and Justin Martin combined to go 0-7 from the free throw line. Takeoff Trav was once again somewhat underwhelming, going for 2 and 5 in 23 minutes.

Dad's take:
(My dad is an old-school basketball guy and a die-hard X fan, and he and I text throughout the games from time to time. His opinions can be both insightful and entertaining, especially pulled from their context. Below is a sampling of his offerings tonight.)
-"Just got home. X up by ten with six to go... Wells already has 12."
- About Walker, who he compared to a washing machine Friday: "Two feet and in he is money." "He looks much better tonight."
-"Lyons oop to Wells the slam! Tu breaks ankles for the layup!"
-"Lyons has Gaines... nine already this half, Gaines has 10 for the game."
-"[Substitutions] look like line changes and they're all scoring."
-"Jenny hacks again." "Jen just tried to pass to Red and hit the rim." "Big Jen needs to focus on his studies because he's going to need a job."
(It should be noted that Dad would trade any of his sons for Brad Redford without hesitation; Big Kenny's inability to get the ball to Red was the catalyst for a lot of the abuse the big man subsequently endured.)
-"We really went OT with these guys last year?"
-"Red drives and kicks to Davis for 3! Juke and drive!"
-"Garbage time - McKenzie is in. Tu back because the scrubs can't dribble."
-"Tu says Cheek is the second best player in the A-10. Humble."