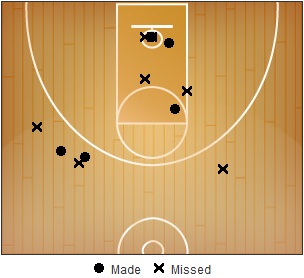 With Tu Holloway sitting out for his suspension, someone was going to have to step up to carry the mail for the Muskies. After things looked pretty dodgy in the early going, Mark Lyons stepped up to post 22/7/6 on 9-17/2-5/2-2. Perhaps just as impressively, Cheek only turned the ball over once and added three steals on the defensive end. With a vacuum at the top, Lyons proved - at least for one game - that he can lead the line if need be. His shot chart to the right shows Cheek got to the rim pretty well and was efficient from behind the arc. He posted a 1-3 from mid-range, the one facet of his game that was a little off tonight.

Big Kenny came up a little small tonight. I didn't very much rate Morgan State's center Ian Chiles in my preview, but he and the whistle combined to keep Frease to a very quiet 10/5/1 with 1 block and 3 turnovers on 4-7/0-0/2-4. Those numbers hint at the efficiency Kenny was playing with before he had to retire to the bench for the duration of the evening. If he had gotten 31 minutes instead of 21 this game, he probably could have posted some more meaningful numbers. 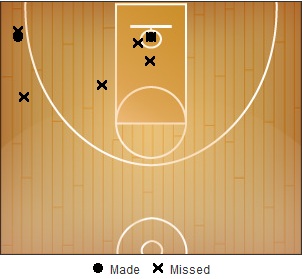 Since he signed his letter of intent to come play for Xavier, Dez Wells' arrival on the court for meaningful games has been the subject of much anticipation for Muskies fans. Getting the start in his first collegiate outing, Dez came pretty much as advertised. His jump shot was less than stellar - he hit one of the six he attempted on the night - but he flashed the athletic ability and finishing power that had Xavier fans following him through prep school. Wells posted 12/4/2 on 5-11/1-3/1-2 shooting. That's his shot chart over there to the left.

Brad Redford's return was a welcome sight for the Cintas faithful, and the Frankenmuth native didn't disappoint. Red posted 6/3/1 on 2-3/2-3/0-0 shooting, which is pretty much what his fans expect from him. It was nice to see his name back in the box score.

-Jeff Robinson got 8 points on 4-4 shooting. That's a good and efficient line, but why stop shooting after four? Timidity has been a hallmark of Robinson's underperformances; I wouldn't have minded seeing him continuing to lift.

-Morgan State started out gangbusters on the glass, but Xavier managed to get back and outrebound MSU 36 to 33 while holding even at 9 to 9 on the offensive glass.