A Response to the Haters

If you buy something from an SB Nation link, Vox Media may earn a commission. See our ethics statement.

Share All sharing options for: A Response to the Haters

To watch Xavier play and lose last night was disheartening and frustrating as a fan. Once there was no longer doubt about the outcome of the game, the focus of the night shifted from cheering to processing what happened. When you're in that state of mind and have access to the internet, you have to be careful about what you put out there. Some of us recognize and ruminate what happened, and then move on. To others, to paraphrase the words of Danny Kaffee, the whole process becomes about assigning blame.

It doesn't take much searching at all on the internet to find the breed of fan who is looking to tear down the people he perceives as responsible for his disappointment. They abound in the comments section on the Enquirer, and sometimes run their own blogs. Frankly, this kind of analysis disgusts me, especially when it masquerades as an attempt to be fair and impartial. It's the lowest denominator of fan that pans their own team rather than actually analyze the game. Since these people are equal parts vitriolic and ignorant, I thought I'd take a moment to address some of their assertions. Dana and Victory was running point for them last night, so it is his (her?) work that comes under the microscope here.

I think we all agree that Mark Lyons' foul trouble was one of the pivot points of the game, but to call his decision-making "bone-headed" is just wrong. His first foul wasn't smart, but his second was neither a foul nor particularly dumb. If you knew Lyons' game, you'd know pulling up for a jumper doesn't suit his style. He was right to drive the ball all the way to the rim, and the official was wrong to call him for a charge when the defensive player hadn't established legal guarding position. 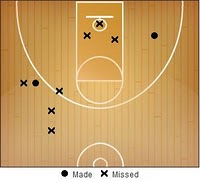 Equally ludicrous is the assertion that Tu Holloway's poor night is tantamount to not showing up. Marquette singled out Holloway to take him out of the game and try to force Xavier's other players to beat them. They pinched the hedge on the ball screen and kept Holloway from either driving or getting a clean look - just as they had with Kemba Walker (14 pts, 5-16 FG). To the left is Holloway's shot chart: it's clear from the distribution of his misses that he tried to force himself into the game by playing outside of his comfort zone. To do more of that would have hurt Xavier's chances, not helped them. It's a credit to his maturity that - as a young man who prides himself on toughness and being able to step up - that he didn't continue lifting from outside of the natural form of the offense to try to prove himself. He needed a teammate to step up and - with Cheek planted on the pine - Xavier's options were limited.

Where things really get goofy is the idea that the coaching staff somehow let the team/school/fans down. Okay, everyone knew Marquette was going to go after Tu hard; how should Mack have addressed that? To punish a team for doubling off a high screen, a team needs at least one of several things. The first would be a screening big man who can put the ball on the floor from 19 feet and be an offensive threat. That's not Big Kenny or Jamel McLean. The second would be to have a guard big enough to fight through the double team; Tu is 6' even and the defenders both often had at least three inches on him. The third would be a spot-up shooter who can punish defenses for having to rotate. Dante wasn't able to consistently fill that role this year, Brad Redford tore up his knee before the season began, and Justin Martin was ruled a partial qualifier. Should the staff had made McLean and Frease more coordinated, Tu taller, Redford healthier, or Martin the owner of a better transcript? When you are a coaching a team that goes seven deep, your strategic options are few.

At the end of the day, it always hurts when your favorite team loses. Considering what the expectations for this team were at the beginning of the year, it's a testament to the work of the coaches and the buy-in of the players that anyone is disappointed in another A-10 crown and a first-round tourney exit. Xavier got paired up against a team with five (now six) RPI top-25 wins that Jeff Sagarin, Ken Pomeroy, and the Massey Ratings all had as equal to or better than the Muskies. The proper reaction to last night's game is to recognize Marquette as a good team with a great game plan that was always going to be a tough matchup for X. It's one thing to fail in an attempt to be critical and insightful in the face of a season ending loss; to look for reasons to point the blame towards a team that overachieved all year is petty, foolish, and wrong.