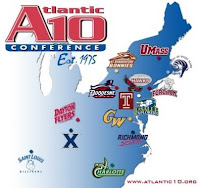 With Xavier already sitting at 8-5 after the non conference schedule and some teams having already played their first conference game, it seems the perfect time to shed some light on the Musketeers chances in the Atlantic 10 (14?) this year. Unlike other previews you may have read back in November, we can now draw on results and thus far better analyze the situation.


To begin with: a disclaimer. As this is a Xavier site, we'll be focusing on how Xavier fits into the A10. Team by team breakdowns are the purvey of the national media. Here the focus will be on what Xavier needs to do to be successful.

The A10 can be divided into three tiers of teams. The lower tier represents games that must be won, the middle tier is filled with games that good teams will win, and the upper tier represents the teams that will be playing for the conference championship. (All numbers are RPI rankings).

Middle Tier: UMass (101), St. Bonaventure (121), and Richmond (78) are where the rubber will meet the road. The contenders will have to make hay here. Xavier will struggle especially with a Richmond team that is 13-4 and beginning to play well. The Spiders are deep and will be able to pressure Xavier's guards.

Upper Tier: Temple (15), Dayton (48), and URI (37) make up the upper crust of the Atlantic 10 this year. None of these teams will be an easy win for our currently underwhelming X-Men. Temple looks to be head and shoulders above the rest and must be considered the favorites to take the conference title. Two wins over UD would not only be great for the fans, they would also greatly bolster the Musketeers chances in the conference.

Worst-case scenario: Xavier staggers out of the gate today with a loss to URI and follows that closely by also falling to the hated Flyers on the 15th. 1-2 in the conference and far out of the at large conversation, the Musketeers never recover and finish near the middle of a conference that is itself stuck in a slightly down year.

Best-case scenario: Xavier responds to the Crosstown Shootout thrashing by going on a tear in the A10. 4-0 and at home, the Musketeers defeat the de facto favorites Temple on the 22nd en route to yet another conference championship.

What will happen: X is still capable of winning this conference. If Coach Mack makes the adjustments and Kenny Frease maintains his current form, the Musketeers can still be the cream of the crop. The Jan 22nd game against Temple looms large as the final chance for this team to prove it is a real player in both the conference and national scenes. I have enough confidence in the coaching staff to expect us to 4-0 going into that game.

Final prediction: A 13-3 conference record with losses to Temple, Dayton, and perpetual nemesis St. Joe's. If Xavier had to have a down year, this is the year to have it. If X can avoid crippling losses to the lower tier and avoid a rising Richmond squad they are still a force to be reckoned with.